The Watergate: Inside America's Most Infamous Address (Paperback) 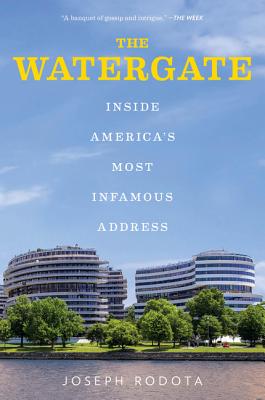 The Watergate: Inside America's Most Infamous Address (Paperback)

Since its opening in 1965, the Watergate complex has been one of Washington's chicest addresses, a home to power brokers from both political parties and the epicenter of a scandal that brought down a president. In The Watergate, writer and political consultant Joseph Rodota paints a vivid portrait of this landmark and the movers and shakers who have lived there.

Watergate residents—an intriguing casts of politicians, journalists, socialites and spies—have been at the center of America's political storms for half a century. The irrepressible Martha Mitchell, wife of President Nixon's attorney general and campaign manager John Mitchell, captivated the nation with a stream of outrageous interviews and phone calls from her Watergate duplex. Supreme Court justices Ruth Bader Ginsburg and Antonin Scalia put aside their differences many a New Year's Eve to celebrate together at the Watergate, dining on wild game hunted by Scalia and cooked by Ginsburg's husband. Monica Lewinsky hunkered down in her mother's Watergate apartment while President Clinton fought impeachment; her neighbor U.S. Senator Bob Dole brought donuts to the hordes of reporters camped out front. Years after Secretary of State Condoleezza Rice hosted chamber music concerts in her Watergate living room, guests remembered the soaring music—and the cheap snacks.

Rodota unlocks the mysteries of the Watergate, including why Elizabeth Taylor refused to move into a Watergate apartment with her sixth husband; reveals a surprising connection between the Watergate and Ronald Reagan; and unravels how the Nixon break-in transformed the Watergate's reputation and spawned generations of "-gate" scandals, from Koreagate to Deflategate.

The Washington Post once called the Watergate a "glittering Potomac Titanic." Like the famous ocean liner, the Watergate was ahead of its time, filled with boldface names—and ultimately doomed. The Watergate is a captivating inside look at the passengers and crew of this legendary building.

Joseph Rodota is a writer and consultant who has worked at the highest levels of politics in Washington, D.C., and California. He worked in the Reagan White House and as a top aide to California governors Pete Wilson and Arnold Schwarzenegger, and has written for the New York Times, Los Angeles Times, Huffington Post and other outlets. He lives in Sacramento, California, where his play Chessman, about the final days of the “Red Light Bandit” Caryl Chessman, premiered at B Street Theatre.

“Excellent. Captures... some of the Watergate’s most notorious residents.”
— USA Today

“Joseph Rodota has written an engaging biography of a building—the Watergate—whose name is forever linked with the politics, intrigue, and power of Washington.”
— Karl Rove, former part-time resident of the Watergate

“An informative, comprehensive account of one of America’s most famous building complexes.”
— Wall Street Journal

“The Watergate tells the story of this incredible ‘city within a city,’ where some of history’s most colorful personalities have lived. Rodota does what every historian aspires to do: he invites the reader to be a fly on the wall. Rodota brings this iconic building to life.”
— KATE ANDERSEN BROWER, New York Times bestselling author of The Residence

“A banquet of gossip and intrigue.”
— The Week

“Joseph Rodota gives us the definitive history of the Watergate complex. Crime sleuths, politicos, fans of the rich and powerful, architects, gossipers and renters everywhere will find The Watergate a fascinating and rewarding read.”
— DONNA BRAZILE, former chairwoman of the Democratic National Committee and New York Time bestselling author of Hacks

“If walls could talk... Joseph Rodota reports what those in the world-famous Watergate complex have been discussing. Read for yourself—you won’t be disappointed.”
— JOHN W. DEAN, former Nixon White House counsel and New York Times bestselling author of Blind Ambition

“A thorough and thoroughly engrossing account of this legendary Washington address.”
— Booklist

“Joseph Rodota recounts all the drama under the Watergate roof.”
— Washington Post

“Skillful. ... Does a good job of mixing historical facts with personal anecdotes to tell the story of what was both the most famous and most infamous hotel in Washington, DC.”
— KITTY KELLEY, Washington Independent Review of Books

“Rodota has a calling for the subject matter. ... Meticulous and intriguing details are many.”
— Washington Times

“The Watergate Hotel has a fascinating food history. ... Rodota unveils accounts of the often forgotten, quirky, fun, or even underhanded events that have transpired under its roof since 1965. ... Juicy.”
— Food & Wine

“Meticulously chronicles the buildings’ biography, including gossipy accounts of various residents (from socialite Anna Chennault to Monica Lewinsky) and, of course, details of the historic burglary.”
— Washingtonian

“Based on painstaking and remarkable research, Rodota... delves deeply and eloquently into the exciting and wild shenanigans. ... Give[s] life to this inanimate configuration of apartments, offices and a hotel complex.”
— WARREN ADLER

“If the walls of the Watergate could talk, they’d transcribe a book we’d all want to read.  Well, now they do, in Joseph Rodota’s paean to this iconic Washington hotel and residence.  No other capital address, save maybe 1600 Pennsylvania Avenue, has been more intertwined with critical figures in modern American history.”
— MICHAEL SMERCONISH

“Incredible research. ... Tells the entire tale of Watergate. ... The perfect book for anyone who loves the complexity of Washington history.”
— The Hagstrom Report