Ibn Fadlan and the Land of Darkness: Arab Travellers in the Far North (Paperback) 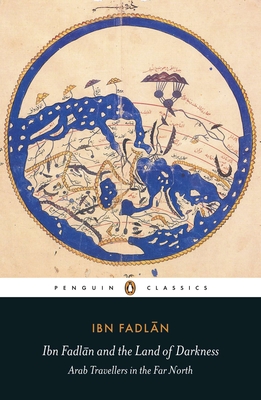 Ibn Fadlan and the Land of Darkness: Arab Travellers in the Far North (Paperback)

Between the ninth and fourteenth centuries, Arab explorers journeyed widely and frequently into the far north, crossing territories that now include Russia, Uzbekistan, and Kazakhstan. Ibn Fadla-n's chronicles of his travels are one of the most important documents from the period, and this illuminating new translation offers insight into the world of the Arab geographers and the medieval lands of the far north. Based on an expedition to the upper Volga River in 922 AD, Ibn Fadla-n and the Land of Darkness provides a rare and valuable glimpse of Viking customs, dress, table manners, religion, and sexual practices, including the only eyewitness account ever written of a Viking ship cremation.

For more than seventy years, Penguin has been the leading publisher of classic literature in the English-speaking world. With more than 1,700 titles, Penguin Classics represents a global bookshelf of the best works throughout history and across genres and disciplines. Readers trust the series to provide authoritative texts enhanced by introductions and notes by distinguished scholars and contemporary authors, as well as up-to-date translations by award-winning translators.
Ibn Fadlan was a tenth-century diplomat who, in 922 AD, was sent on a mission from Baghdad to the far north by the caliph Muqtadir. His subsequent account of his travels and the peoples he encountered is one of the most important documents from the period.

Paul Lunde studied at London University's School of Oriental and African Studies and specializes in Islamic history and literature. He is the author of Islam: Culture, Faith, and History and is working on an Internet project to map pre-modern Eurasian cultural and intellectual exchanges.

Caroline Stone has edited and written numerous books and articles, principally on textile history, medieval history and literature, Islamic culture and literature, and the cultural and economic relations between Europe and the Orient in the pre-modern era. With Paul Stone, she is translating a collection of the writings by the Arab geographer Mas'udi for Penguin Classics.
"[An] exceptional little anthology. . . . It is a fascinating book, with a nugget of curious information on each page, adding up to a picture that turns preconceptions on their head. . . . These are not just interesting books: they go a long way towards undermining the stereotypes about Islam that have become such a toxic part of our current discourse."  —The Scotsman