American Merchant Ships on the Yangtze, 1920-1941 (Contributions to the Study of Science) (Hardcover) 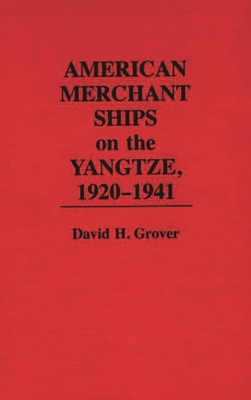 American Merchant Ships on the Yangtze, 1920-1941 (Contributions to the Study of Science) (Hardcover)

This work describes the activities of a handful of American companies and about eighty American captains who were trying to run ships on China's great river during the treacherous days between the two world wars. The considerable physical dangers of the Yangtze itself were compounded by the greater human hazards imposed by constant fighting among warlords, piracy, brigandry, kidnapping, opium and munitions smuggling, corruption, seizures, and other forms of intimidation. The events recall--and surpass--anything of the Wild West in American frontier history. No American steamship company survived longer than twelve years in this environment, but Standard Oil, which was sheltered from the worst of the violence, was able to operate its ships throughout the entire period.

More than a naval/military, or even economic, history, this book is also a commentary on a significant but largely unsuccessful American commercial venture overseas--one that was eventually scuttled by the actions of the Chinese and the American companies themselves. Ship buffs, maritime historians, students of the evolution of modern China, and those interested in American commercial history will find this study useful and entertaining.

DAVID H. GROVER, a 1945 graduate of the U.S. Merchant Marine Academy, spent several years at sea as a merchant marine and naval officer. Later, he went to graduate school and became a university teacher. He was also Academic Dean of the California Maritime Academy. Now retired, he has published numerous articles and four books--two of western American history and two of maritime history.