Mind Over Media: Propaganda Education for a Digital Age (Paperback) 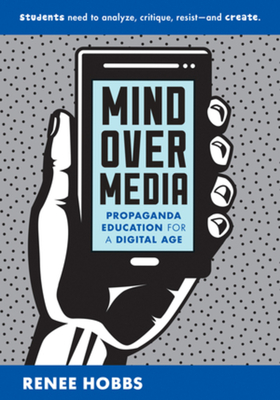 Mind Over Media: Propaganda Education for a Digital Age (Paperback)

Winner of the AAP 2021 PROSE Award for Excellence in Social Sciences.

Media literacy educators have always insisted that we are both creators and receivers of media messages. The truth of this is even more apparent in today’s digital environment, with children and adults alike participating in a ubiquitous, nonstop stream of social media. Clearly, students need the tools to interpret news and information critically—not just for school but for life in a “post-truth” world, where the lines blur between entertainment, information, and persuasion.

Renee Hobbs demonstrates how a global perspective on contemporary propaganda enables educators to stimulate both the intellectual curiosity and the cultural sensitivities of students. Replete with classroom and online learning activities and samples of student work, Mind Over Media provides a state-of-the-art look at the theory and practice of propaganda in contemporary society, and shows how to build learners’ critical thinking and communication skills on topics including computational propaganda, content marketing, fake news, and disinformation.

Renee Hobbs is an internationally-recognized authority on digital and media literacy education. She founded the Harrington School of Communication and Media at the University of Rhode Island and is Director of its Media Education Lab. Hobbs co-founded the NAMLE (National Association for Media Literacy Education), and is creator of the first national teacher education program in media literacy at the Harvard Graduate School of Education. She won the Media Literacy Education Meritorious Service Award from NAMLE in 2015, is the author of 10 books, and over 150 scholarly articles on digital and media literacy. Her book, Mind Over Media: Propaganda Education in a Digital Age, won the 2021 PROSE Awards of Excellence from the American Association of Publishers (AAP) in Social Sciences and Education Practice & Theory.

Douglas Rushkoff is an award-winning media theorist studying human autonomy in the digital age. Named one of the world’s ten most influential intellectuals by MIT, he teaches at CUNY/Queens, hosts the Team Human podcast, and authored several bestsellers including Present Shock. He lives in Hastings-on-Hudson, New York.
Mind Over Media is essential reading, now that we and our children are immersed in a new world of social media, viral memes, and computational propaganda...Media literacy is now a vital tool for the defense of democracy.

[T]he best resource for educators at all levels who want to help students become responsible critics, users— and creators— of propaganda in all its forms.
— Peter Levine, PhD, Professor of Citizenship & Public Affairs, Tisch College of Civic Life, Tufts University

Hobbs provides us with the most comprehensive take on the ecosystem of propaganda yet. This is not only a book for educators, but for all who are interested in better understanding how our digital culture is influencing society today.
— Paul Mihailidis, PhD, Associate Professor, Civic Media and Journalism, Graduate Program Director, Media Design, Emerson College

A critically important factor in accounting for the extreme political, social, and culture polarization of the American public today is that digital media in the form of Facebook, Twitter, Instagram, and 'information/news' web sites (especially on the far right and left of our political spectrum) informs more American citizens than traditional radio, television, newspaper, and magazine formats. This makes Mind Over Media: Propaganda Education for a Digital Age a critically important and essential addition to community, college, and library Political Science in a Digital Age collections and supplemental curriculum studies lists.