Wicked Takes the Witness Stand: A Tale of Murder and Twisted Deceit in Northern Michigan (Paperback) 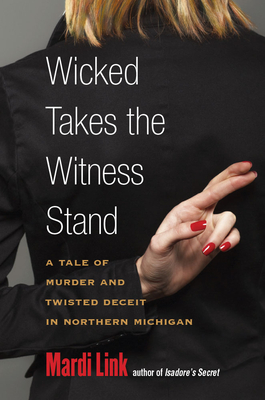 Wicked Takes the Witness Stand: A Tale of Murder and Twisted Deceit in Northern Michigan (Paperback)


Ships in 2-7 Days
On a bitterly cold afternoon in December 1986, a Michigan State trooper found the frozen body of Jerry Tobias in the bed of his pickup truck. The 31-year-old oil field worker and small-time drug dealer was curled up on his side on the truck’s bare metal, pressed against the tailgate, clad only in jeans, a checkered shirt, and cowboy boots. Inside the cab of the truck was a fresh package of expensive steaks from a local butcher shop—the first lead in a case that would be quickly lost in a thicket of bungled forensics, shady prosecution, and a psychopathic star witness out for revenge.
Award-winning author Mardi Link’s third book of Michigan true crime, Wicked Takes the Witness Stand, unravels this mysterious and still unsolved case that sucked state police and local officials into a morass of perjury and cover-up and ultimately led to the separate conviction and imprisonment of five innocent men. This unbelievable story will leave the reader shocked and aching for justice.
Mardi Link is a journalist; a former police reporter; and the author of two true crime books, Isadore’s Secret: Sin, Murder, and Confession in a Northern Michigan Town and When Evil Came to Good Hart, which spent two months on the Heartland Indie Bestseller List and was a finalist for the Michigan Notable Book Award.