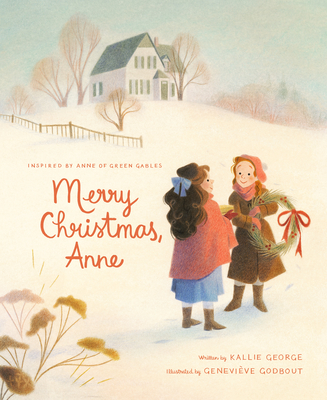 It's Christmas in Avonlea, and Anne is thankful for so many things: feathery frosts and silvery seas, and wreaths as round as the moon. But most of all, she's thankful for her kindred spirits, including Marilla and Matthew Cuthbert, who adopted her, and her bosom friend Diana. But Anne is distracted this holiday by having to recite at the upcoming Christmas concert. And she feels bad that her kindred spirits give her so much during the year when she has very little to give in return. Can Anne overcome her jitters and make her kindred spirits proud -- and also think of a way to show her appreciation for the people she loves?

With magical illustrations and a heartfelt message, this festive picture book is the perfect holiday read for Anne fans old and new and a joyous way to celebrate the season.
KALLIE GEORGE is an author, editor and creative writing teacher living in Vancouver, B.C. She has written numerous acclaimed books for children, including Goodnight, Anne; Anne Arrives; Anne's Kindred Spirits; If I Couldn't Be Anne; Secrets I Know; Duck, Duck, Dinosaur and The Melancholic Mermaid, as well as the The Magical Animal Adoption Agency series and The Heartwood Hotel series. She has also taught writing workshops for children and adults across Canada, as well as in South Korea, and currently teaches at Emily Carr University.

Born and raised in Quebec, GENEVIÈVE GODBOUT studied traditional animation in Montreal and at the prestigious Gobelins school in Paris. She is the author/illustrator of the picture book What's Up, Maloo? and is the illustrator of a number of books for children, including Goodnight, Anne; If I Couldn't Be Anne; The Pink Umbrella; When Santa Was a Baby and Mary Poppins. Some of her clients include The Walt Disney Company, Chronicle, HMH, Flammarion, Bayard, Les éditions Milan and La Pastèque. She also works for clothing designers like Nadinoo and Mrs. Pomeranz, creating illustrations and prints for their collections.