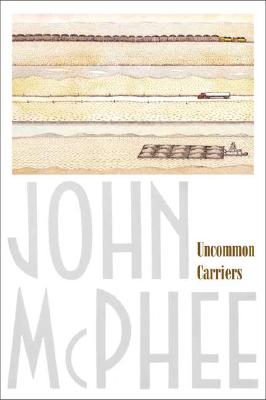 This is a book about people who drive trucks, captain ships, pilot towboats, drive coal trains, and carry lobsters through the air: people who work in freight transportation. John McPhee rides from Atlanta to Tacoma alongside Don Ainsworth, owner and operator of a sixty-five-foot, five-axle, eighteen-wheel chemical tanker carrying hazmats—in Ainsworth's opinion "the world's most beautiful truck," so highly polished you could part your hair while looking at it. He goes "out in the sort" among the machines that process a million packages a day at UPS Air's distribution hub at Louisville International Airport. And (among other trips) he travels up the "tight-assed" Illinois River on a towboat pushing a triple string of barges, the overall vessel being "a good deal longer than the Titanic," longer even than the Queen Mary 2.

Uncommon Carriers is classic work by McPhee, in prose distinguished, as always, by its author's warm humor, keen insight, and rich sense of human character.

John McPhee was born in Princeton, New Jersey, and was educated at Princeton University and Cambridge University. His writing career began at Time magazine and led to his long association with The New Yorker, where he has been a staff writer since 1965. Also in 1965, he published his first book, A Sense of Where You Are, with Farrar, Straus and Giroux, and in the years since, he has written over 30 books, including Oranges (1967), Coming into the Country (1977), The Control of Nature (1989), The Founding Fish (2002), Uncommon Carriers (2007), and Silk Parachute (2011). Encounters with the Archdruid (1972) and The Curve of Binding Energy (1974) were nominated for National Book Awards in the category of science. McPhee received the Award in Literature from the Academy of Arts and Letters in 1977. In 1999, he was awarded the Pulitzer Prize for Annals of the Former World. He lives in Princeton, New Jersey.
“To read the studious John McPhee in this sensationalist age, when so many other literary journalists are shrieking from some self-aggrandizing edge, is to be reminded of what the genre should be--artfully reported stories that illuminate who we are.” —Robert Braile, The Boston Globe