One Nation Under Graham: Apocalyptic Rhetoric and American Exceptionalism (Hardcover) 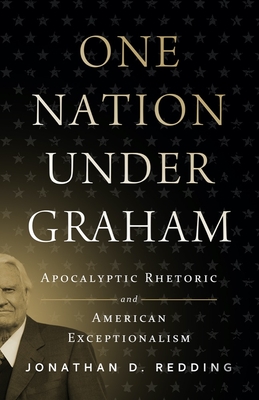 One Nation Under Graham: Apocalyptic Rhetoric and American Exceptionalism (Hardcover)

For centuries, particular readings of the biblical text have shaped the course of Western history. Scripture, used as a political totem for those in power, gives divine weight to political agendas. This trajectory is particularly evident in the fiery career of Billy Graham, America's evangelist. Graham's rhetoric, steeped in his political appropriation of Scripture, ultimately motivated the insertion of under God into the pledge of allegiance: his message of national repentance made its way to President Dwight Eisenhower, who converted it into legislation and changed history. America became self-consciously a nation under God, over against the world.

One Nation under Graham investigates how one man's interpretation of the biblical books of Daniel and Revelation has impacted how the United States sees itself on a global and cosmic scale. Jonathan Redding argues that Graham rode the wave of American xenophobia to rebrand evangelical patriotism as essential to national stability and cosmic balance. A survey of Graham's influences reveals that, while Graham was far from the only Christian leader to preach gloom and doom, he was one of the first to make the theme publicly and profoundly American. Graham's influence and drive to make America a nation under God ensured that, with the recitation of the American pledge, his reading of Scripture would endure. Redding further shows the continued capacity of under God to equip contemporary leadership to leverage Christian faith for personal gain with a political base.

Graham's response to major political and global events created a thoroughly American apocalyptic lens that continues to be used to give life and potency to biblical interpretations. In the same way that Daniel and Revelation warned of the dangers of unchecked political power and misplaced priorities, One Nation under Graham uses Graham's interpretations to urge all of us to consider under whom we serve and under what flag we kneel.