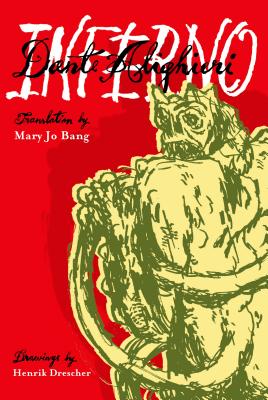 Stopped mid-motion in the middle
Of what we call a life, I looked up and saw no sky-
Only a dense cage of leaf, tree, and twig. I was lost.
--from Canto I

Award-winning poet Mary Jo Bang has translated the Inferno into English at a moment when popular culture is so prevalent that it has even taken Dante, author of the fourteenth century epic poem, The Divine Comedy, and turned him into an action-adventure video game hero. Dante, a master of innovation, wrote his poem in the vernacular, rather than in literary Latin. Bang has similarly created an idiomatically rich contemporary version that is accessible, musical, and audacious. She's matched Dante's own liberal use of allusion and literary borrowing by incorporating literary and cultural references familiar to contemporary readers: Shakespeare and Dickinson, Freud and South Park, Kierkegaard and Stephen Colbert. The Inferno--the allegorical story of a spiritual quest that begins in a dark forest, traverses Hell's nine circles, and ends at the hopeful edge of purgatory--was also an indictment of religious hypocrisy and political corruption. In its time, the poem was stunningly new. Bang's version is true to the original: lyrical, politically astute, occasionally self-mocking, and deeply moving. With haunting illustrations by Henrik Drescher, this is the most readable Inferno available in English, a truly remarkable achievement.

Dante Alighieri (c.1265–1321) is the author of The Divine Comedy, a masterpiece of world literature.

“The only good Hell to be in right now is poet Mary Jo Bang's innovative, new translation of Dante's Inferno, illustrated with drawings by Henrik Drescher. Bang's thrillingly contemporary translation of the first part (the juiciest part) of Alighieri's 14th-century poem The Divine Comedy is indeed epic. . . . Once you embark on this journey, you may wish to read not only all of Mary Jo Bang's work but all of Dante's, too.” —Elissa Schappell, Vanity Fair

“Being an excellent poet in her own right, [Bang] succeeds in giving the Inferno's narrative drama an energetic idiom that gets the poem moving, and at times even dancing on the page. . . .The result is one of the most readable and enjoyable versions of the Inferno of our time.” —The New York Review of Books

“This will be the Dante for the next generation.” —Publishers Weekly, starred review

“A transformative translation.” —The Millions

“Bang [dwells] in depths--not only in Dante's, but our own. . . . Bang's hell is our culture, the numbing proliferation of texts, images, meanings, interpretations. For her, the perfervid busyness of our culture leads to a deadening akin to spiritual numbness. Hence the allusions to everything from Woody Allen's Crimes and Misdemeanors to the Boy Scouts to frozen Jell-O to the Hotel California--these are the fragments that have shored up against our ruins, to borrow from T. S. Eliot, who knew a thing or two about Dante, and death, and fittingly appears several times in these pages.” —New York Daily News

“[Bang's] Inferno is a classic recast for our age, a hell we'll find ourselves in, an old poem made new by one of our most surprising and innovative poets.” —Craig Morgan Teicher, National Public Radio

“Wonderfully evocative to a contemporary reader. . . . Bang did something incredibly smart before she coaxed Dante's corpse to sit up and sing for us: She taught him how to talk like us. Hell is more appealing in the form of a mirror.” —The Stranger

“Mary Jo Bang's Inferno is quaking with aliveness. . . . [Her translation] will burn us all awake.” —Eileen Myles, The Poetry Foundations Harriet blog

“Mary Jo Bang's new translation of Dante's Inferno restores meaning to that old book-blurb cliche, 'startlingly original.' . . . Imagine a contemporary translation of Dante that includes references to Pink Floyd, South Park, Donald Rumsfeld, and Star Trek. Now imagine that this isn't gimmicky. . . . Imagine instead that the old warhorse is now scary again, and perversely funny, and lyrical and faux-lyrical in a way that sounds sometimes like Auden, sometimes like Nabokov, but always like Mary Jo Bang.” —BOMBlog