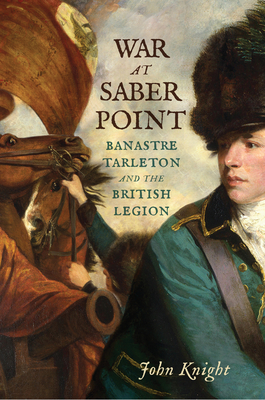 
Ships in 2-7 Days
The American Loyalist Regiment Led by the Most Charismatic British Commander of the War
The British Legion was one of the most remarkable regiments, not only of the American Revolution, but of any war. A corps made up of American Loyalists, it saw its first action in New York and then engaged in almost every battle in the Southern colonies. Led by a twenty-four-year-old libertine who purchased his commission to escape enormous gambling debts, the Legion gained notoriety for its ruthless tactics. Excelling in “special operations,” they frequently overwhelmed the Continental forces they fought, becoming the most feared British regiment of the war.
Banastre Tarleton and the Americans he led have always been characterized as brutal, immoral villains—most recently in the movie, The Patriot. But this study subverts our pre-conceived notions of patriotism. The men who filled the Legions ranks were not weak-willed collaborators or treacherous renegades, but free men as motivated by conscience as the Patriots they battled. Few were wealthy. None had a vested stake in the British Government. Each believed that in defending the Crown; they were upholding the rule of law and preserving individual liberty.
These men followed Banastre Tarleton clear across America for years, sacrificing not only their families and homes but, in many instances, their lives. Self-interest could not have persuaded them to do this. Patriotism and fidelity did. Relying on first-hand accounts—letters, diaries, and journals—War at Saber Point: Banastre Tarleton and the British Legion is the enthralling story of those forgotten Americans and the young Englishman who led them.
John Knight earned a joint honors degree in American History and Politics from Warwick University. He was a fine-art appraiser for a number of London-based auction houses including Christie’s and Bonhams before taking up writing and lecturing full-time. A regular contributor to the Journal of the American Revolution, he splits his time between homes in Nottingham, England, and Dutchess County, New York.
“‘Bloody Ban’ is the Tory we love to hate. His reputation endures in America as a fierce fighter and a vicious war criminal. . . . Knight provides a well-written, balanced, and informative account focused on one of the Revolution’s more infamous participants and the fighters he commanded. His account is well worth reading.”—Journal of America’s Military Past

“War at Saber Point: Banastre Tarleton and the British Legion contains surprising insights into Banastre Tarleton, and it disputes many common misconceptions about this British officer. . . . Throughout the book, Knight compares Tarleton’s vicious reputation with factual evidence, which contradicts the commonly held idea that the British commander was deliberately cruel. After the battle at Monck’s Corner, an American defeat, atrocities were committed by some in the British Legion, and Tarleton was accused of ordering the release of the guilty troopers. In fact, Tarleton was outraged by the incident and wanted one perpetrator hanged. Knight also explores the so-called Buford’s massacre at the battle of Waxhaws. While the Americans sustained significant losses, Knight argues that much of the carnage was due to serious errors made by the Americans on the field. Knight disputes Colonel Abraham Buford’s official report to the Virginia General Assembly, which claimed that his men were killed ‘after they had laid down their arms.’ Two eyewitness accounts supported this assertion; however, these accounts were written well after the battle and are demonstrably unreliable. Tarleton, in his report to General Henry Clinton, took credit for the victory and acknowledged killing 170 Americans but reported no ‘irregularities’ in the conduct of his men. None of the American soldiers claimed that there had been a massacre, and Revolutionary War pension records of the participants do not accuse the British Legion of any improper behavior. Knight believes that Buford’s later account of the battle ‘seemed geared toward deflecting criticism from himself’ due to his having issued ‘incompetent or confused orders to his men’ before he fled the battlefield. Nevertheless, Buford became a symbol of the British inhumanity toward the enemy, which created a potent propaganda weapon and the rallying cry, ‘Remember Tarleton’s Quarter.’ Given the Americans’ propensity for information warfare, the ‘Waxhaw massacre’ was memorialized in the same way as the ‘Boston massacre’ had been and was used to inflame American passion against the British enemy. . . . War at Saber Point provides a unique view of the relationship between American Loyalists and the British army during the Revolution and offers a new perspective on the reputation of Banastre Tarleton.”—Journal of Southern History