The Other Red Line: Washington Street, from Scollay Square to the Combat Zone (America Through Time) (Paperback) 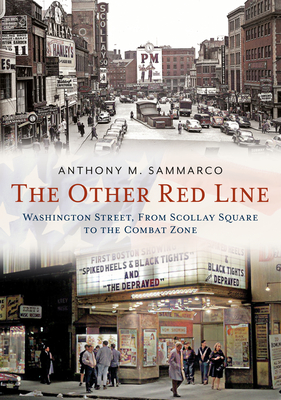 The Other Red Line: Washington Street, from Scollay Square to the Combat Zone (America Through Time) (Paperback)

The Other Red Line is literally the connecting point between Scollay Square and the Combat Zone, the two preeminent adult entertainment districts in Boston. With burlesque houses such as the Old Howard and the Crawford House, movie palaces began to open, showing silent films accompanied by a pianist, news reels and comedy acts. The New Palace Theatre, the Star Theatre, the Theatre Comique and the Scollay Square Olympia offered vaudeville as well as silent films, which were a novelty at the time. With so many people seeking entertainment in Scollay Square, restaurants, bars and sandwich shops offered an entertaining evening out, and it became a destination.

Burlesque was King, and the anointed Queens of Burlesque danced at both the Crawford House and the Old Howard, as well as smaller clubs, which were renowned not just in Boston, but incredibly even around the world, and had well-known performers who were beloved by their audience. However, so too was the Combat Zone, a vibrant area that beckoned Bostonians and service men for lurid entertainment. As Scollay Square's allure waned in the late 1950s, that of the Combat Zone took on a new shine in the 1960s, albeit a tawdry and garish shine that tried to emulate the other, but quickly devolved into a seedy, gritty place that offered vulgar and graphic entertainment. With bars, strip clubs and theaters beginning to show adult X-rated movies, the area increasingly became a place that one either went out of his way to avoid or found so alluring that the inevitability of joining in the irreverent fun of it quickly overcame one's reservations.

The Other Red Line is a fascinating glimpse into the adult entertainment districts of twentieth-century Boston.