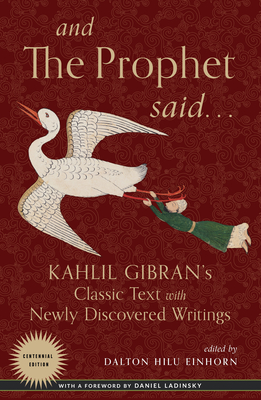 Newly discovered writings from the author of the classic bestseller, The Prophet

And the Prophet Said is a new complete gift edition of Gibran's classic text with over 150 newly discovered poems, aphorisms, and epigrams.

Originally published in 1923 by Knopf, The Prophet is a teaching fable that has been cherished by millions for nearly 100 years. It is a book of wisdom that to live, provides guidance for readers on how to live a life imbued with meaning and purpose. He explores all of life's important issues--including love, marriage, the human condition, friendship, prayer, beauty, death, and much more.

What makes this edition of The Prophet especially exciting is the inclusion of newly discovered Gibran material. In 2017, Dalton Hilu Einhorn gained access to the Gibran/Haskell archives at the University of North Carolina. Buried among this treasure trove of papers, he discovered over 150 of Kahlil Gibran poems, aphorisms, and sayings that had never been published.

Here is classic Gibran wisdom and inspiration that leads readers to contemplate love, beauty, mortality, and meaning. The words have an immediacy and depth that will appeal to the millions who have read The Prophet.

Kahlil Gibran (1883-1931) was writer, poet, and Lebanese nationalist and visual artist. His teaching fable, The Prophet, remains one of the bestselling inspirational works of all time.

Dalton Hilu Einhorn is the son of Virginia Hilu, who edited, Beloved Prophet, a groundbreaking book about Kahlil Gibran and Mary Haskell based on their letters and her diaries at the University of North Carolina.  In 2017, he gained access to the Gibran/Haskell archives at UNC, discovering over 150 Gibran pieces never before published. He lives in Massachusetts.

“…a captivating centennial edition Gibran’s The Prophet packed with newly discovered material, including 150 of Gibran’s never before published prose poems, aphorisms, and passages from The Earth Gods not included in any other edition.”
— Publishers Weekly

Mystic and Maronite Christian Gibran (1883–1931) is best remembered for The Prophet, first published in 1923. The book's proverbial qualities, delivered in simple prose straddling meditation and poetry, document a stranger responding to life's questions while visiting an island. This new edition of this classic text, edited by Einhorn (Beloved Prophet), adds to the original by including illustrations by Gibran himself as well as previously unpublished poems and adages discovered in archives at the University of North Carolina. In addition, the rich foreword by poet Daniel Ladinsky along with the introduction by Einhorn flesh out the relationship between Gibran and his benefactor, Mary Haskell, and provide context for various unpublished writings. Einhorn shares his personal connection to this material as well: it was his late mother who began editing these newfound treasures. Here, Einhorn seeks to draw closer to his mother through the work that sustained her until her death. VERDICT A rich collection for all interested in the work and ongoing legacy of Gibran.
— Sandra Collins, Byzantine Catholic Seminary Lib., Pittsburgh