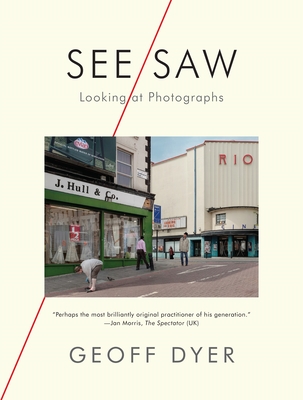 
See/Saw shows how photographs frame and change our perspective on the world. Taking in photographers from early in the last century to the present day—including artists such as Eugène Atget, Vivian Maier, Roy DeCarava, and Alex Webb—the celebrated writer Geoff Dyer offers a series of moving, witty, prescient, surprising, and intimate encounters with images.


Dyer has been writing about photography for thirty years, and this tour de force of visual scrutiny and stylistic flair gathers his lively, engaged criticism over the course of a decade. A rich addition to Dyer’s The Ongoing Moment, and heir to Roland Barthes’s Camera Lucida, Susan Sontag’s On Photography, and John Berger’s Understanding a Photograph, See/Saw shows how a photograph can simultaneously record and invent the world, revealing a brilliant seer at work. It is a paean to art and art writing by one of the liveliest critics of our day.

Geoff Dyer is the award-winning author of many books, including Out of Sheer Rage, Yoga for People Who Can’t Be Bothered to Do It, Zona, See / Saw, and the essay collection Otherwise Known as the Human Condition (winner of a National Book Critics Circle Award for criticism). A fellow of the Royal Society of Literature and a member of the American Academy of Arts and Sciences, Dyer lives in Los Angeles, where he is writer-in-residence at the University of Southern California. His books have been translated into twenty-four languages.

“Geoff Dyer is an idiosyncratic master of both the image and the word.”—Harper’s

“Enthusiastic and entertaining essays. . . . An intelligent writer with a renaissance inclusiveness of subject matter, Dyer is famed for his ability to cover a wide range of cultural topics, draw on an eclectic knowledge base, and think across genres and disciplines, all in order to decipher bold and imaginative insights.”—Rain Taxi Review of Books