The Nightgown & Other Poems (Paperback) 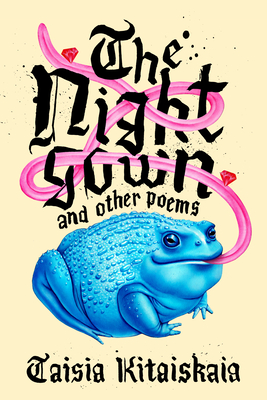 The Nightgown & Other Poems (Paperback)

The Nightgown is a mythic, mystic, and hungry collection of poems, a roiling landscape wandered over by wild swerves of language, creatures of all sorts, and mysterious beings such as The Folklore, The Hurt Opera, The Eunuch, and the titular angry Nightgown. Haunted by the magic and transformations of Slavic and Western European fairy tales, the symbolism of the Tarot, the medieval world, feminism, and a mythology all its own, The Nightgown bears an immigrant's fascination with the alien syrup of the English language's first stratum, that merciless Anglo-Saxon word-hoard preserving an ancient consciousness of human, beast, and earth. Funny and loud, the poems are strangely accessible in their animal awareness of mortality and urgency for contact with the unknown. The Nightgown is the debut book of poetry from renowned writer Taisia Kitaiskaia (Literary Witches: A Celebration of Magical Women Writers).

Taisia Kitaiskaia was born in Russia and raised in America. She is the author of Ask Baba Yaga: Otherworldly Advice for Everyday Troubles and its follow-up, Poetic Remedies for Troubled Times from Ask Baba Yaga, as well as Literary Witches: A Celebration of Magical Women Writers, a collaboration with artist Katy Horan and an NPR Best Book of 2017. She has received fellowships from Yaddo and the James A. Michener Center for Writers. She lives in Austin, Texas.