Batman: Facts and Stats from the Classic TV Show (Hardcover) 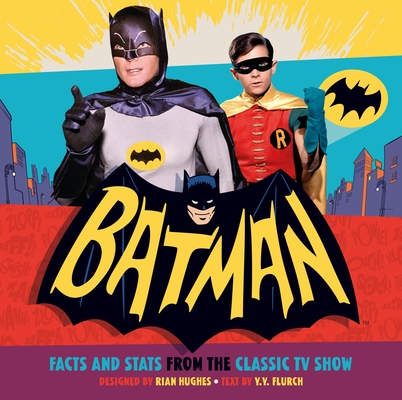 Batman: Facts and Stats from the Classic TV Show (Hardcover)


Unavailable
KA-POW! BOFF! ZAP! This action-packed gift book is the perfect introduction and guide to the beloved 1960s Batman Classic TV series. The Dynamic Duo, the colourful villains, the gadgets--it’s all here! Filled with fascinating facts, statistics and quotes, this fun-filled book is loaded with great photos. The ideal gift for all Batman fans!


BATMAN and all related characters and elements are trademarks of and (c) DC Comics. (s15)
Flurch is the fictional author of the fictional book A Pictorial History of Silent Films, featured in Batman episode 31.

Rian Hughes is an award-winning graphic designer, illustrator, font designer and comics artist, noted for his work on 2000AD, and Dan Dare. His illustration work is highly distinctive, wearing its design influences on its sleeve. Clients include Virgin Airways, Penguin Books, DC Comics (for whom he has designed numerous logos), Eurostar, the BBC and a range of magazines and newspapers. He is the editor and designer of several books including Lifestyle Illustration of the 60s and the recently released Cult-ure.
“The book is very pretty. Much like the show, it's incredibly colorful and cool to look at. Also, it's jam packed with images from the show.” - Cinema Sentries

“The most colorful Batman ’66 book to date...The Front and Back Boards are inspired” - 13th Dimension

“Certainly manages to capture the spirit of the show” - Retroist

“Rich and fun...It’s as much a blast to read as I’m sure it was to write and design, and all credit should go to “Y. Y. Flurch” and Rian Hughes for absolutely nailing the tone.” - Batman News

“You will not be disappointed.” - Retrenders

“Even if you’re a die-hard Batman 66’ fan and have poured over every detail, visited every Bat-related website and joined in on the Bat-forums, this book should still be in your collection” - Beyond the Marquee

“A present sure to Whap! Biff! and Zok! Adam West obsessives everywhere.” - Den of Geek

"Batman: Facts and Stats is entertaining and a fun read for the casual Batman fan" - Adventures in Poor Taste

“Filled with fascinating facts, statistics and quotes, this fun-filled book is loaded with great photos.” - Forces of Geek gift guide

"One of those coffee books you pick and don't put down until you hit the last page."  - Batman Notes


“a great look at a rogue’s gallery of humorous and over-the-top villains that made TV viewers keep coming back each week” - Borg.com