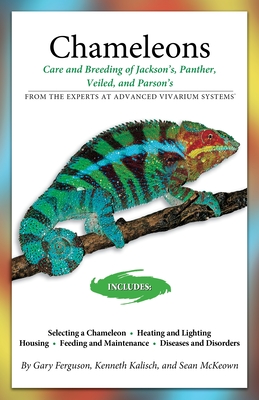 The one and only chameleon is world renowned for its ability to change its skin color rapidly (throughout movement of pigment cells) and for the outrageous length of its tongue (more than one and a half times its body length ). Relatives of agamids and iguanas, chameleons are insect-eating, tree climbing reptiles that have highly specialized needs. Written by a team of experienced herp experts, Chameleons intends to instruct keepers on how to best care for their chameleons and covers the four most commonly kept species: Jackson's chameleon with its prized triceratops horns on its head, panther chameleon with its spectacular coloration, veiled chameleon with its unusual casque on its head, and the rather large Parson's chameleon. The book subsequently is divided into four parts, each including an introduction and natural history, captive care, and reproduction of the species. Part I, Jackson's Chameleon was written by Sean McKeown; Part II, Panther Chameleon by Gary Ferguson, James B. Murphy, Achille Raselimanana, and Jean-Baptiste Ramanamanjato; Part III, Veiled Chameleon and Part IV, Parson's Chameleon by Kenneth Kalisch. References and index included.