A Most Gallant Resistance: The Delaware River Campaign, September-November 1777 (Paperback) 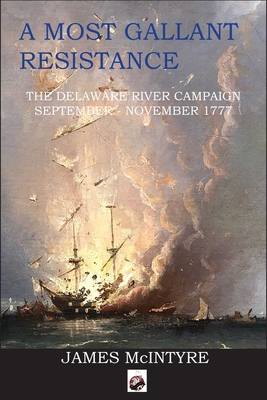 A Most Gallant Resistance: The Delaware River Campaign, September-November 1777 (Paperback)

Most histories of the American War of Independence discuss what are usually regarded as the two major campaigns in 1777. Either they describe the invasion from Canada led by General John Burgoyne which resulted in his subsequent defeat and the surrender of his force at Saratoga, New York, or they focus on William Howe’s Philadelphia Campaign. Often left out of these discussions, or treated only in passing, is the reduction of the Delaware River defenses that engaged the bulk of the resources and attention of both George Washington and William Howe through October and November of 1777.

On the American side, maintaining the integrity of the river defenses involved an attritional campaign waged by an intrepid group of defenders which brought together the efforts of the Continental Army, as garrisons of the various forts, the Continental Navy and the Pennsylvania State Navy.  If the Americans could hold their positions until winter set in, they would prevent William Howe from capitalizing his capture of Philadelphia, and possibly force him to abandon the city for want of supplies.
Jim Mc Intyre received his Bachelors in History from Temple University in 1996 and his Masters from the University
of Illinois in 1999. His main interest is the American War of Independence, on which he has written numerous
articles and papers. He is the author of The Development of the British Light Infantry, Continental and North American
Influences 1740-1765 and Johann Ewald: Partisan Commander. He teaches History at Moraine Valley Community College
near Chicago, Illinois and serves as a Fleet Professor in the United States Naval War College’s College of Distance
Education, Strategy and War Department as well.